Ragging in educational campuses is widely recognised as a potential genesis of campus violence, sectarianism and even suicides. It is less well-recognized as a human rights abuse.

The D Y Patil Education Society Deemed University recognizes the right of every student to receive education in an atmosphere that is safe, congenial, supportive and understanding.  The University has adopted the concept and reality of ‘Zero Tolerance for Ragging’ and the UGC Anti Ragging Regulations on curbing the menace of ragging in higher educational institutions, 2009 are implemented in letter and spirit.

The human rights of each student is to be protected both by intent and action in a systematic and deliberate manner. Regular communication, creating awareness about ragging and its’ nuances, warning students about penalties for ragging, mentoring, counselling, anti-ragging measures, vigilant squads and an active anti-ragging committee are part of the system of the University.

The Commission on Human Rights had asked the Special Rapporteur to focus on overcoming obstacles and difficulties in the realization of the right to education worldwide and keeping in view this direction, the Special Rapportuer made specific mention of Ragging in Chapter V STREAMLINING THE HUMAN RIGHTS FRAMEWORK FOR EDUCATION:

Ragging , though widely believed to be a major factor for campus violence and suicides in educational institutions in India, is yet to be recognized as a systematic human right abuse in Education and such human right violations in education have not been given proper attention in India, which they otherwise deserve. 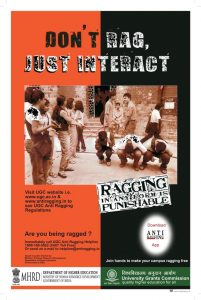 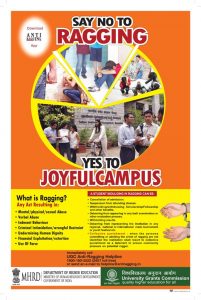 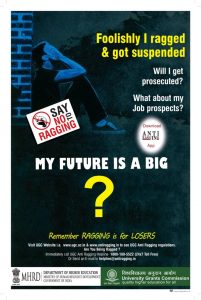